I just got back from the dentist. No, nothing major, just a cleaning. But I had to make sure to take my new purse... 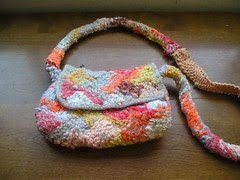 I spent much of August making this. I had to rip out and start over a couple times before I got it right.

I think this is the third purse I've made this year. (The last one.) It probably won't be the last. It's not quite right, but it's the closest I've come thus far. (I don't like the straps.)

Everyone in my dentist's office knows I knit. Every time I go, I have something that they comment on. (All the purses I use I knit myself.)

I sort of explained how this one was made. It's hard to explain felting to a non-knitter or anyone who hasn't tried felting. You wouldn't know that this was knit due to the density of the fabric.

I also finished another flounder... 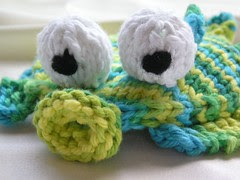 I started this one as a birthday gift for my nephew, but after finishing the body I found it was a bit too small. I started another one, and that one I gave as the gift. This guy sat for a while until the older nephew hounded me to finish a flounder for him.