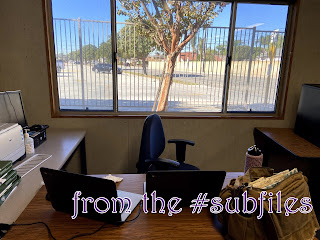 I live in southern California. We have a Mediterranean climate which means that we have very mild winters. If you've ever tuned in to the Rose Parade on New Year's Day (sadly, 2021's has been cancelled) and noticed the sunny day, yeah, that's pretty standard winter weather for us.

November isn't necessarily all that cold. On November 1st, I was still wearing my Capri-length pants and sandals to work. But the weekend before last, the weather took a turn towards winter.

The weekend was cold and rainy. Friday and Sunday we had gusting winds. It rained Saturday.

I arrived at school. The classroom temp was 61°F (16°C). I wasn't feeling cold, and I knew the outside temp would go up quickly, so I did not turn on the heat.

Normally, I might have some temperature complaints, but I'd ignore them as the students would warm the room quickly enough. But as the students are at home, they weren't going to notice.

A funny thing happened as the day progressed. The classroom didn't get any warmer. When I left to use the restroom, I was surprised at how much warmer it was outside. Upon returning to the room, I found the temp to be 63°F (17°C).

I've complained in the past at how uninsulated the classrooms are. Turns out, I was wrong. The rooms can hold the temp pretty well. It's the mass of student bodies that heats things up.