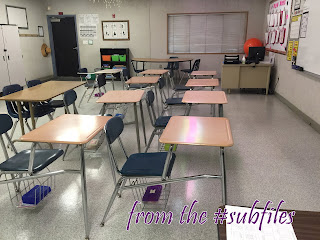 Back to day-to-day subbing, my next assignment was for one of those very special ed. classes. This was one of those classes where the students were ninth and tenth grade aged, but the assignment for first period was a challenge.

First period is "calendar" period. They take time to go over what day it is, what the weather is like outside, what season it is, what tomorrow will be, and what yesterday was. (All these types of classes do this.) Then they had a couple worksheets to complete.

The first worksheet consisted of them tallying all the boys and girls in the room (and tracing the alphabet). The second worksheet required a bit more thinking on my part.

The top half of the second worksheet was all the months with boxes underneath. The bottom half had little pictures. There was one with hearts, one with a leprechaun hat, one with a pumpkin, one with a Christmas tree, with twelve images in all.

Clearly, they were to color in the images, then cut and paste them into the proper months. Easy enough, right?

Only, three images weren't so obvious. They were: a sun, a pencil, and an apple. (If you know exactly what month those images go to, pat yourself on the back.)

These are the sorts of kiddos that needed help figuring out which month the leprechaun hat went into. Of course, the first one that the kiddo that asked for my help grabbed was the sun. I told him to set that one aside until we had pasted the images we knew.

Once the leprechaun hat went into March, the Easter basket obviously belonged in April. The flowers had a tag that said "mother", so that got us May. Once we got the nine obvious months done, we were left with June, August, and September.

Now, it was time for me to make some guesses.

Well, the pencil was obviously for back-to-school. My teen self would have put that in September, but we started school mid-August. Okay, so pencil went to August.

And then the sun made sense. First day of summer, anyone? Because the apple has to go to fall, and that has to be September.

At least, I hope I was right. It makes sense.

I wasn't the only one confused. The instructional aides also questioned those three.

These sorts of classes are a real change of pace. It was pretty opposite of the spectrum from the day before.
Posted by Liz A. at 8:00 AM