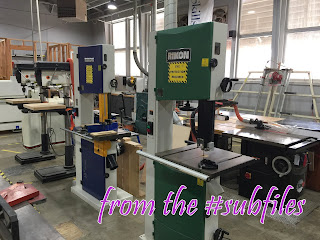 "Their assignment is in Google Classroom..."

These words in a lesson plan make me nervous. About half the time, the kiddos log in, find the assignment, and everything goes smoothly. Alas, this day fell into the other half of the time.

Middle school woodshop. Yes, woodshop. A good 1/3rd of the class already knew me from the vacant English class.

They logged in. The assignment was supposed to be from chapter three according to the lesson plan. Only chapter two appeared in Google Classroom.

(When there's a sub in certain classes like woodshop or graphic arts--classes where kiddos use equipment that they really need supervision for--they always get "bookwork". But nowadays much of that stuff is available online.)

I did the only thing I could do. I emailed the teacher to let him know.

Well, at least the rest of the classes would have the assignment posted.

Everything went fairly smoothly until sixth period. That's when several students got Chromebooks that were nearly dead.

Upon examination of the Chromecart (where the computers live--and charge--when not in use), I discovered the plug was halfway out of the outlet, and nothing was charging. Oops.

I plugged it in, turned "on" the cart, and charging happened. If only I had discovered this issue so that everyone had a charged enough computer...

(A fully-charged Chromebook has about eight hours of charge. Most teachers teach five hours, so there's no good reason to have dead Chromebooks sixth period. Still, I should have checked...)
Posted by Liz A. at 8:00 AM