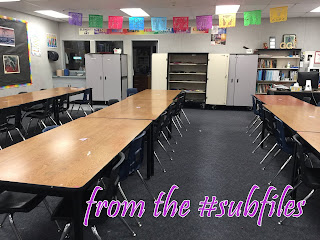 I was asked to cover an extra period after lunch. Middle school art. Insert groan here.

I ate my lunch in the classroom I was covering for the day. Then at the bell, I called to get security to unlock the door for me. (I've found that if I call before I leave my "home base", I don't have to wait as long for security to show up.)

When I got to the art room, the door was open. Security had arrived before me, and she had let the kiddos in the room already. I walked in, looking for the day's lesson plans.

That's when I spied Victoria. She's been on security at that school for years. She was hovering over a student, asking the crying girl if she wanted to go to the health office. The girl said she was fine.

After class got started, Jaci explained that the reason she was limping was because a boy had hit her leg at lunch. She had had surgery on her ACL not too long ago, and she wasn't fully healed. (She said it'd take a year to get fully healed with the implication that she was taking a year off her sport for this.)

Jaci bent and moved and figured no major damage had occurred. I told her she should report this boy. She said she wasn't going to get him into trouble. Apparently, he's been in enough trouble. My point was that since he deliberately injured her, he should suffer the consequences. She didn't agree.

If she doesn't report him, he's never going to learn. Sigh.

Jaci and the rest of the class got to work. They were creating "graffiti" versions of their names. They did the usual sort of stuff that middle schoolers do. I kept an eye on them. I didn't have to intervene too much, which meant things were going pretty well.

But then Kristen walked up to me. She was shaking, and she said that she needed to step outside. I do stop to question students when they make those sorts of requests unless it's obvious what's wrong. I waved her on.

I went to the group she was sitting with. What did they do? I had been watching them...

Jaci said Kristen was having a panic attack. Kristen sent her a text. And the group said they hadn't done anything.

It's possible I missed something subtle. But I'll believe the group unless Kristen says otherwise.

A short time later, Victoria came in to retrieve Kristen's stuff. I assume she went home.

All sorts of drama always in the middle school classes. At least it keeps it interesting.
Posted by Liz A. at 8:00 AM