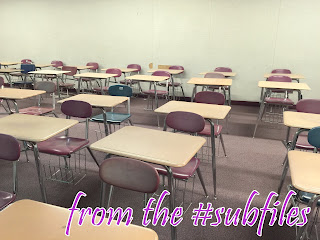 The topic for the day was writing a summary, so for the seventh graders' warm up, they were to write a summary of their favorite movie.

You'd think this would be easy, but several didn't have a favorite movie or didn't like movies, or some such. But once I took away the onus of it having to be their very favorite, most found something to write about.

I asked for volunteers to read out their summaries without telling us what movie. And for the most part we knew what the movie was just from the summary. There was Toy Story, X-Men, Spongebob Squarepants, The Lion King, and several other movies that weren't at all surprising.

I may have mentioned a time or two that sixth periods tend to be different. They can be wild. But I've got a good group, and I'm not allowing wild, so this group is just kind of strange. There are a couple girls who act way more mature (and seem to have a good head on their shoulders) than I generally get in a seventh grade class.

I gave the same warm up to sixth period. London hemmed and hawed.

"I'm not sure which movie to pick. I have two favorites. Pulp Fiction or Kill Bill."

Seventh graders are twelve years old. Generally. (Some may turn twelve in the next couple months, most will turn thirteen sometime during the school year.)

It's not my place to tell a parent how to parent their child. And this child acts way more mature than most of her peers. (Seriously. She seems pretty aware of social issues and current events.) But those movies...

I told her that either would work for the warm up as I wasn't going to hold her to that being her very favorite forever and ever. So, she wrote her summary on Kill Bill.

On the bright side, no one else in the class was able to guess what film she was describing.
Posted by Liz A. at 8:00 AM