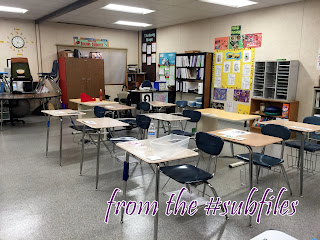 It was one of those "severe" special ed classes where the high school aged kiddos are doing second grader work. The teacher had helpfully left a list of all the students and the things I should look out for.

Laila was obsessed with her toys. We were to gather them from her, then give them back to her at the end of the day.

She repeated several things throughout the day. Besides the snack thing, she told me repeatedly that she missed her mom. I told her she'd see her mom after school.

And Laila could be stubborn. For history, they were to cut out the names of the original 13 colonies and paste them next to the outlines for those states. One of the aides color-coded them, so they'd be able to paste the names in the correct positions. But Laila was being unruly, so they sent her to work one-on-one with me.

She wanted to cut. So, I let her have a pair of scissors. She randomly cut slices into the paper, through the names, and all over the place. That's when I took the scissors away and did the cutting out of names.

At that point, Laila was done. She would not paste anything. She wanted to cut. But as soon as I got done cutting, she noticed that her paper had all these random cuts in it (that she had made), and that made her sad. She walked away from the project, refusing to do any more.

Finally, the end of the day arrived. The students were all escorted out to their buses or to be picked up by their parents. Laila went right for the teacher's cabinet. This cabinet had been locked all day, and none of us had the key.

We couldn't get into the cabinet. Laila refused to leave the room. The aides reminded her that her mother was waiting for her. Nope, she fell to the floor and refused to go.

She wanted her toys. They weren't in the cabinet, of course, because no one could go in there. We eventually found them, and then she willingly left.

This is what makes these days interesting. There's always at least one kiddo that keeps you on your toes.
Posted by Liz A. at 8:00 AM