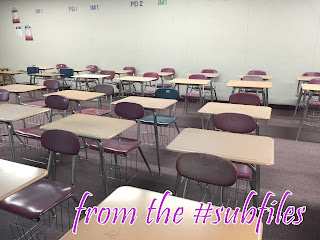 It was the first full week of school. I am covering a "vacant class" until they are able to bring in a teacher for the rest of the year. I have three periods of seventh grade English and two periods of eighth grade English.

Because of this, I got to do something I've never gotten to do before. I got to go over the syllabus with the students.

Every day I've tried to have a list of what they'll need for the day written on the board for them. (Some days I'm able to, others not so much.) On this day I had that list up. They needed a piece of paper and a pen or pencil.

I explained the assignment. They got to writing.

Only about half way through the period, one boy said he was finished. That's when I noticed he had written his letter in red ink.

The previous day, while going through the syllabus, I made sure to spend some time explaining how if they were going to use ink, it had to be black or dark blue ink only.

The boy, who has already distinguished himself as one of the challenging students in a difficult class, explained that I did not specify the pen couldn't be red.

Um, I thought that was implied. It was in the syllabus. I spent a couple minutes going over their supply list.

At this point, the girl seated next to him (also trouble, but for different reasons) got on his case. Why would he have a red pen anyway? She said she was going to start calling him Red Ink from now on.

As he still had half the period, I told him he could recopy the letter in the proper color of ink. He did, but not until he had grumbled about it.
Posted by Liz A. at 8:00 AM