I finished all the panels for my windmill bag: 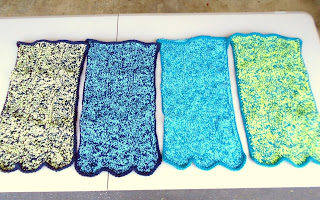 After seeing the inspiration picture again (for last week's post), I decided they needed an edging. That's done too (as you can see from the photo).

Now all that's left is the assembly.

Unlike how I usually am with my projects, I let a few errors slide through. I could have fixed them, but I decided no one would notice (not really), and as this is just a rough draft (so to speak) of this project, finished was better than perfect.

But, I will point out the errors.

1. Half way through this panel, I changed how I did the increase stitches. If you look closely, the bottom looks different than the top: 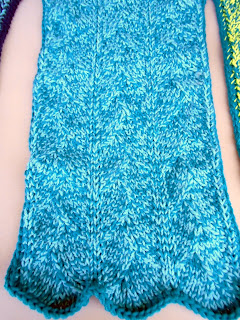 It was the first panel I made. I could have ripped it out and started over. If I had done that, I don't think I would have continued.

2. After I finished that first panel, I raided my yarn stash for other colors to use. As I finished the second panel, I decided to stick to only four different color yarns. But I did not have enough yarn to finish two more panels. I went to buy another skein of the navy blue and light green: 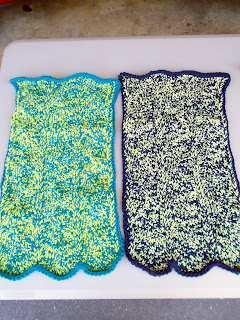 Navy blue was easy. Alas, I got the wrong light green. It's close, but it's not quite the same. Oops. (Although, the store did not have the right color light green, so this was really the best I could do.)

3. On the last panel I made, on the last couple of pattern repeats, I made a knitting error: 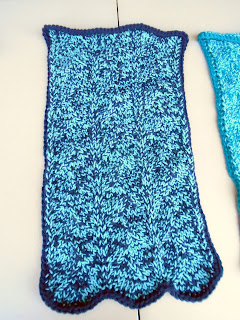 And rather than going back and fixing it (which I normally would totally do), I figured no one would really be able to see it, and I wanted to finish the thing. This is probably the only time I'll ever say I wanted something finished more than I wanted it right.

Now it's just a matter of sewing the panels together: 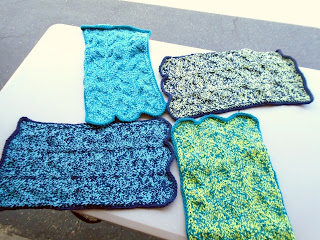 I think I'll probably edge the top a bit, and then add handles. I'm not sure. I'll keep plugging along, and it should be finished sooner rather than later.
Posted by Liz A. at 8:00 AM