This week, in my continuing Projects that Fell by the Wayside theme from this month, I had planned to show off a second finished walking purse. (I don't know what I was going to title this to make it fit for Y, but I figured something would come to me.)

And then I had to start the purse over.

I'll eventually write a post all about it, so I'll save the frog and restart details for then. For today, I'm going to answer a question from last week's yarn-y post:

How do you store the projects that you aren't working on? In some type of bag so they don't pick up dust or lint or whatever?

I keep them in boxes.

For example, here's that walking purse that I'm currently working on... 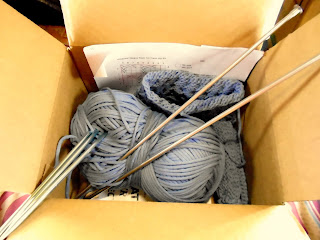 I keep the yarn, needles, pattern, and all the other miscellaneous stuff that a project in progress tends to collect. It's a mess and a bit bulky, but it works for me.

I have both of the scarves together... 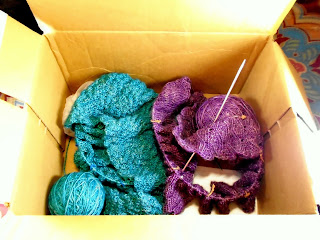 The projects are linked. And I have a tendency to create one box for all my current projects, so sometimes it takes a while for them to get a whole box to themselves.

Things that I pick up occasionally, like the jellyfish or the unicorn... 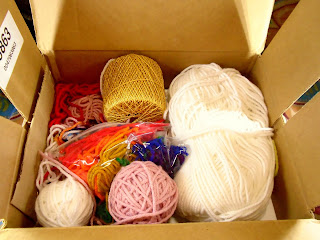 ...are more likely to have a dedicated box. (The jellyfish box is buried, so all I have a picture of for today is the unicorn gift card holder box.)

And here's a little project that I started in late 2018 and have barely touched since... 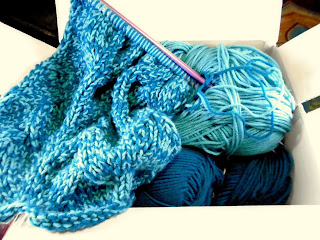 I'll explain it when I have enough done for a post about it to make sense.

(Since I finished up all my Tuesday What If? posts back in March, I am officially done with my A to Z posts. Woo-hoo!)

How do you store your projects in progress? If you're doing A to Z, did you finish all your posts early, or did you write them as we went? Can you believe how fast April went? 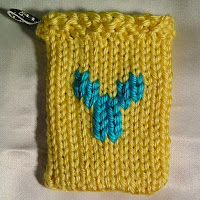 Email ThisBlogThis!Share to TwitterShare to FacebookShare to Pinterest
Labels: a to z, knitting, photo