That One Last Try 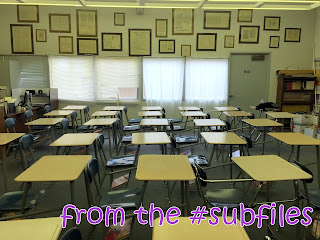 It was Friday, day two of a two-day assignment. The teacher had been out all week. (Another sub got Monday through Wednesday. I only covered Thursday and Friday.)

The fact that the whole schedule is AP is significant. See, the AP tests were from May 7-18. The students work hard to prepare for that test. Once they've taken the test, they're done for the year.

Yup, a whole day of students who were done for the year.

But I wasn't stressing. The teacher had left movies for them to watch.

On Thursday I had done all the panicking. There were no lesson plans, but I knew what they were likely doing. I located the teacher's laptop (which is what they play movies on nowadays), got myself logged in (which was a story in and of itself), and found the teacher's DVDs when the teacher called. The DVD I found was the one he wanted them to watch.

The DVDs all worked on Thursday. So, when I arrived on Friday, I went about setting everything up. (I shut down the laptop before leaving the prior day.)

As it was a Friday, I had arrived a bit late. (Fridays I'm either running really early or really late. This was a late week.) So, I was still setting up when the kiddos started arriving. But no big deal, I thought. I was logged in. All I needed to do was insert the DVD...

So, I tried every trick I know. I ejected and reinserted the DVD. I restarted the computer. I even resorted to asking the students for help. And nothing would work. There was no use for it. It was time to call for help.

The school has a tech helper. He has saved my butt on more than one occasion. But I don't want to call him in if I don't have to. At this point, I had to.

It takes him some time to get to the class, so I went back to the laptop. What if I tried a different DVD? (The government and psychology classes were watching something different.) I popped in the government class' DVD just at the tech helper arrived...

And wouldn't you know it? Now it worked. Naturally.

I apologized for bothering the tech guy now that I had managed to get the thing to work. As always, he was very nice about it. But, I still felt stupid about getting him to come all the way out to the classroom.

With the issues on Thursday and Friday, that class didn't finish the movie. Ah well. At least they had something to do the next week...
Posted by Liz A. at 8:00 AM