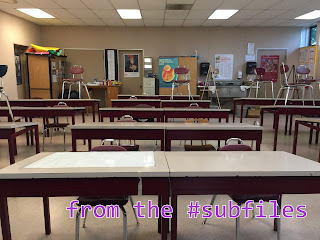 Back from winter break, I was called to cover "culinary arts". (Not the picture above. Someone *ahem* forgot to take a pic of the classroom...)

Period three was "culinary arts 2", or those who were taking a second year of cooking. Surprisingly, Kevin was enrolled.

There were seven students enrolled in the class. Six were present. And basically this is the class where they do competitions and things. (There are all sorts of programs through the county for various technical and vocational programs.)

It was a make work assignment, but they were on task. Even Kevin.

He figured out what he thought an answer was, and then he asked the class if he was right. And on that went for a while. Until he needed a restroom break.

A bit later, another student asked to use the restroom. That's when I noticed that Kevin had been gone a while. I mentioned that Kevin was out...

Apparently, the other students are familiar with Kevin's lack-of work ethic.

Although, Kevin did return. After a while. At which point he gave up doing the assignment. Sigh.

(Which is not surprising considering what I saw the last time I had Kevin in class. If you go back and reread that post, Ms. S in #3 is this class.)
Posted by Liz A. at 8:00 AM