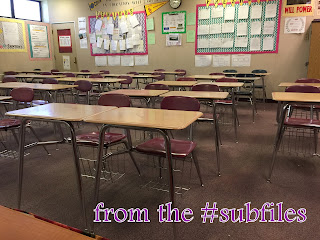 9th grade English. They had a writing assignment. They had started it the previous day, and it was due by the end of the period.

This made for an easy day for me. They picked up their computers. Logged on. And worked silently.

Kevin and I met in a math class. It was one of those math classes I haven't written about, because I basically spent those days trying to stay awake. The good classes. But Kevin... He wasn't so good.

He wasn't awful. He just engaged in the usual avoiding of the work. I'd pass by his desk. He wouldn't have done any work. I'd ask. He'd say he understood the assignment and that he'd get it done. But by the end of the period there was no work on his paper. And there had been way too much laughter going with him and his group.

So, when I noticed him doing nothing except for flirting with the girl seated behind him (and playing with his spinner), I reminded him that his essay was due. He should get cracking.

Kevin informed me that he was almost done. He'd get it completely finished, no problem. Just... later...

The class was mostly silent, so I got busy trying to stay awake. Although, I watched Kevin. Doing nothing. Not getting that last little bit done.

Towards the end of the period I was drawn back over to Kevin's vicinity for something not Kevin related. I mentioned to another student that there were only ten minutes left in the period...

If I didn't know any better, I'd've said Kevin looked freaked. But I know he wasn't. He couldn't have been. He had it all under control, right?

There was something gratifying about knowing that there was no way Kevin was going to be able to make that assignment up. (I made sure to mention how he did a whole lot of nothing in the note.)

Why they just don't start the assignment at the beginning of the period and goof off after they finish is beyond me.
Posted by Liz A. at 8:00 AM