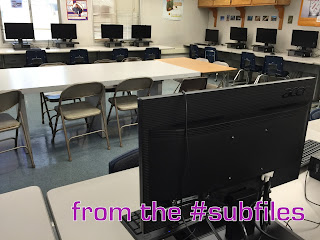 As I've covered orientation many times, I'm familiar with the routine. So, when I noticed Kendrick was off task, I gently prodded him about getting to work.

"I only need five credits."

Yeah, orientation is worth five credits. But they can earn more if they put the work in. (They can earn less if they do nothing.) I explained...

"No, I only need five credits."

I was confused. There's no way the continuation high school would take a transfer from a student who was only five credits short. There's a waiting list for entrance. Besides, five credits can be made up in summer school or credit recovery which is offered before and after school at the high schools.

And only then did I catch on. He was lying to me.

I get lied to all the time. Blatantly, sometimes. About all sorts of things. But this lie caught me completely unawares.

I guess it was because it wasn't even a plausible lie.

I suppose he saw a sub, thought he could play it off like he was about to graduate, and figured he'd con me into letting him do nothing. Ah, how little he realizes how badly he misjudged the situation...