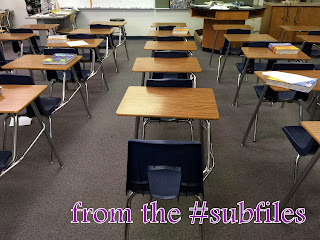 It was fifth period science at the continuation high school. The day had started off pretty good, but at this point, the students weren't all that into the doing of work of it all. Three of them put their heads together as one of them pulled out some Starbursts.

I caught snippets of the discussion. Something about "striped sides". It sounded like they were going to treat them as dice. Um, okay...

I pulled out my daily note. I started writing.

"Are you writing down that we're rolling Starbursts?" one of the boys asked.

Well, no. Actually at that moment I was finishing up my notes for period four. But I wasn't going to tell them that.

I made a mental note to myself. "Rolling Starbursts." Brilliant description. I went back to writing my period four notes.

The idea that I was writing it down upset them? Before I pulled out the note, when I was telling them to get to work, they informed me they would after their game. Their game that they play all the time. So, if they play it all the time, why would their teacher be upset?

The boy wouldn't let it go. "But, you're going to get us into trouble. He'll drop us from the class. Why you gonna play us like that?"

Huh? I always leave notes. I always write these sorts of things down. They know me. This shouldn't come as a shock.

He continued to argue. He told me that I should delete the mention from the note. He asked me exactly what I had written. (As I hadn't written it down yet, I hedged.) When I wouldn't, he said he was so upset he wasn't going to do any work. (Not that he had been doing work. But now, somehow, him not doing work was my fault.)

The protester returned to argue with me a couple more times, between rounds of the game, I imagine.

The end of the period arrived. Had he finished his game and done any work? Of course not. The boys finished by "disposing" of their playing pieces. (Read: they ate the candy.)

If they would only put that sort of effort into their schoolwork, they would graduate in no time.
Posted by Liz A. at 8:00 AM