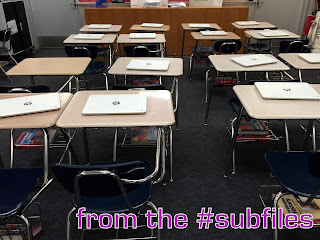 It was Friday at the middle school. On Thursday, I had run into the teacher and mentioned that I was his sub for Friday. He told me he was chaperoning a field trip (to Raging Waters--end of year reward for the well-behaved), and he'd see me in the morning. So, when I arrived to his room to find no lesson plans, I wasn't worried.

The warning bell rang. I was still alone. So, I opened the door to let the kiddos (7th graders) in. I stood at the door, looking for the teacher...

It wasn't a spider. It was a cockroach. And it was on the floor next to a girl. To her credit, she wasn't freaking out. The rest of the class, however...

Since it was an "advanced" class, the kiddos problem solved, and as a team managed to do something about the insect. Loudly. This is why I didn't hear the phone ringing, although someone helpfully told me that it was.

The teacher was on the phone. He was on his way, but he wasn't going to get to class before the bell, so he wanted to let me know what first period was doing.

Somehow I managed to get the class' attention, and I told them to get their computers. (Naturally, they had a Google Classroom assignment.) A couple more students then walked in. It was then I realized that the bell hadn't rung yet. Oops.

I was curious, so I asked how many of the students were going on the field trip. (They were leaving after first period.) 60-70% of the class. No wonder they were wound up. But still, they logged into their Google accounts and got to work. Eventually.

It took some time, but the chatter gradually subsided. Slowly, the room crept towards silence. And at about the moment they achieved it, the teacher walked in.

(I did admit to Mr. F that the silence was a recent thing. The students told him all about the excitement.)
Posted by Liz A. at 8:00 AM