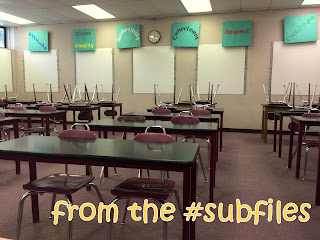 But when on the Wednesday before winter break during the other calculus class (the non AP one mentioned yesterday) a student started playing Christmas music via his phone, I let it pass. It wasn't too loud, and half the class was in the middle of a discussion about some anime show.

Some days are like that. It was a battle I wasn't in the mood to fight.

The girl in front of Scott wasn't so sanguine about it all, though. She told him that it was too loud. That perhaps he shouldn't by playing the music at all.

They were all the way across the room from me, in the opposite corner. And I heard all this. The room wasn't terribly loud even though everyone was talking. A fairly mellow day.

Scott replied that no one was complaining. He said it was days before Christmas and everyone wanted a bit of Christmas cheer.

The girl wasn't so sure. So, she started asking various classmates if the music was bothering them. After her fifth or sixth no, I figured it was time for me to jump in.

"Is the music bothering you?" I asked the girl.

Because I was totally ready to have that battle if she wanted the music off.

I rather doubt this. If she was actually fine with it, she wouldn't have started the conversation.

But that ended her questioning the rest of the class. And we were stuck listening to the Christmas music for the rest of the period. Well, I was stuck. I think the other students kind of tuned it all out.
Posted by Liz A. at 8:00 AM