The other day (okay, it was more like a couple months ago), someone made a comment about how many jellyfish I'd made. And I realized that I had no idea what that number was. The vast majority of them have gone to other homes upon my finishing them.

But I had kept records. Could I track down the number? (And, the thought occurred, it might be a good idea to keep a list of them from now on.) So, since I really have nothing interesting to talk about today...

The initial idea came from someone at that farmers market I do from time to time. She showed me some images, and from there I was able to track down the pattern (via One Dog Woof). (This came out just about a year ago. Wow.)

And then I made my first jellyfish... 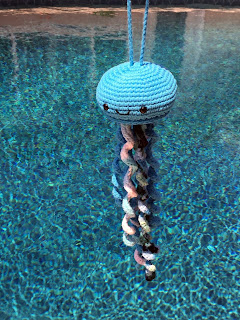 Shortly thereafter, I made two others... 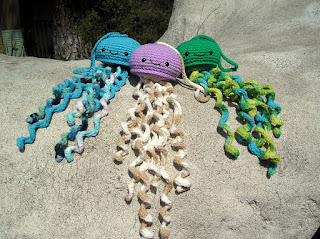 And then the one that went to Betty... 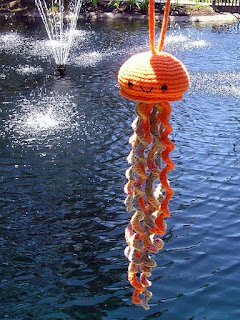 The lady who bought the first one requested one in purple for herself. Then four others for her granddaughters... 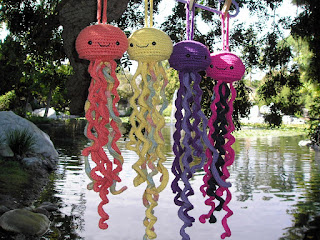 I made three for others at the farmers market, two for Christmas presents, and one for someone family adjacent, none of which I remembered to get pictures of. Then MJ ordered one... 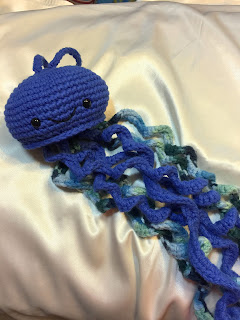 And finally, just a couple weeks ago, the one from my "neighbor" at the last farmers market I did... 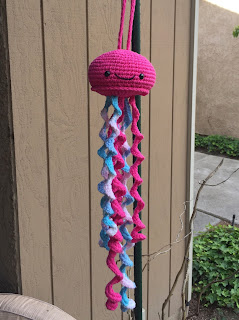 That's 17. I've neglected to mention that after Christmas I got bored and made another one in orange. (The purple one in this image is from the second image. I can't recall when I made that middle blue one.) 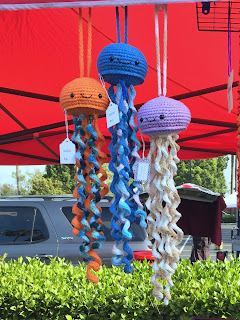 Anyway, the whole reason that this even came up was because of Anna. She's seeking donations for a Support the Troops Auction for the USO of North Carolina, and I offered to make something. She suggested a jellyfish, and I had the brilliant idea that it should be red, white, and blue.

It's not quite finished yet... 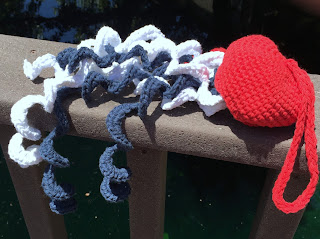 While I was working on this one, I started to wonder, again, how many of these things I'd made. And so, I decided to count them up. This one makes 20.

Oh, by the way, I also started another yellow one. Just because I had the yarn and I was bored one night. It's barely started, but it'll bring my total to 21.

I have this image in my head of my farmers market booth with a line of jellyfish. So, there are going to be more. Eventually. Probably.
Posted by Liz A. at 8:00 AM