Last week I mentioned my internet woes. It looks like the problem might be solved, so I can write the post I intended to write last week. Hooray!

(If I have not gotten around to your blog yet, I should soon. I have a couple days to catch up on after the fiasco that was last week.)

I finally finished the requested gloves: 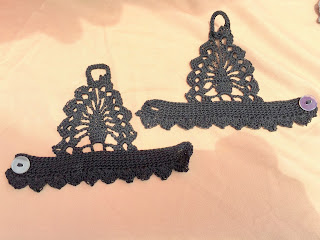 I have not delivered them yet (scheduling issues), but once I do, I should get a good shot of them modeled. 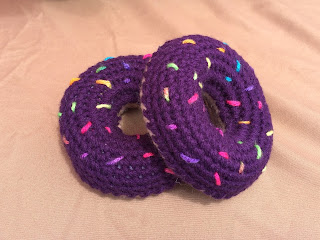 They were originally ordered from another seller at the farmers market. Connecting with her has also been a challenge.

Seems like I'm getting all these requests from other farmers market vendors. Which again happened on Sunday the 12th...

One of the vendors brought her son. He found my booth, and he got to talking. He saw my EOS lip balm holders... 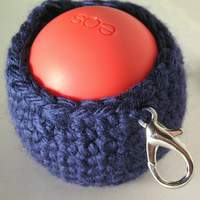 ...and told me I should make one like the Yo-Kai Watch. Which I'd never heard of. I looked it up... (I'm not going to post a picture due to copyright issues, so check out the link if you have no idea what I'm talking about.)

Then later, Pam, who manages the non-food vendors, had something to show me. Amigurumi jellyfish. (Again, copyright, so please check out the link.) Which apparently is now a thing on Pinterest. It's so much of a thing that when I mentioned what I was making when I went to buy eyes, the ladies knew exactly what I was talking about.

I had hoped to have one finished to post today, but alas, not quite. Those tentacles take a while. But next week for sure. (I'm close to finishing one.)

Also, this is my week over at Unicorn Bell. Where I'm whining talking about how I've been writing chapter 20 for a very long time...
Posted by Liz A. at 8:00 AM