Nothing New to See Here

So, um, yeah. As of this writing, I haven't done much of any work on the gloves from two weeks ago... 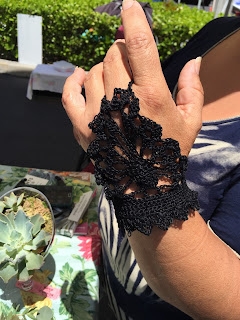 (I may have done more on Sunday, but it won't be done in time for me to post it before this post goes live.)

I don't have any good excuse for my lack of progress. Just life, I guess. Maybe next week?

Since last Monday was a holiday, some of my regular readers didn't see my post. So, I'm reposting from last week. (For those of you who were here last week, I made no significant changes to the rest of this post.)

One month short of a year ago, I shared my sister-in-law's GoFundMe with you all. From that post:


Heather, my sister-in-law, was diagnosed with Multiple Sclerosis in April 2012. She has an aggressive form of MS, and she needs help for her best treatment option... (Go here for the full post.)

That took her to Panama in July of last year. Since then, I've been trying to get her to do another interview to update you all as to her progress, but with one thing and another...

The GoFundMe has been updated this weekend with what's going on right now...


Short version:
Heather’s health has rapidly declined over the past 4 months. She is currently back in Panama getting another round of stem cell treatments. She’s been there for a week and will be down there for a total of 3 weeks.

Full update:
February was 6 months from the stem cell treatment in Panama. A routine MRI was scheduled to keep tabs on Heather’s progress. When she got a call from her doctor and was asked to come in for the results, we knew there was a problem.

The MRI showed that she still only had the one lesion on her pituitary gland, but there were indications that something much worse was ahead. What her doctor saw was the precursor to something called Schilder’s disease. This is an extremely rare type of MS that has only been diagnosed in 99 people in 100 years. Heather became number 100... (Go here for the full update.)

If you could share Heather's story with your social networks, they would greatly appreciate it.
Posted by Liz A. at 8:00 AM