At this rate, I might have to revive #idiotsummer...

It's been a bit of a week. I was on track to finish a couple projects by the weekend only to fail due to mistakes I made.

I finally managed to put my purse together. I did some crab stitch around the outside to neaten up the edges, only to find that it gave the purse a bit of a ruffle, and not in a good way. Then I attempted to glue down a button, but it wouldn't stick.

I ripped out the edging and redid it. At the moment, the purse looks like: 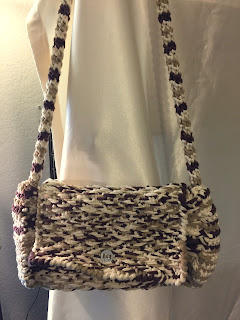 It's almost there. We'll see if I can get it finished. Finally.

But what made me feel like a complete idiot was another jellyfish... 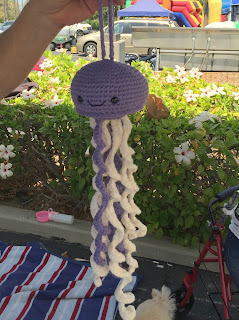 This is the fifth one I've made. I should have this pattern down. I stayed up late to get the eyes and smile positioned correctly. Took over an hour. Finally got it looking good. Then went to stuff the thing while attaching the bottom only to discover I had worked the bottom incorrectly.

The very last round I worked in single crochet instead of double crochet. Which is clearly stated on the pattern. But I completely missed.

The fix turned out to be fairly straightforward (and I was able to complete it in about a half hour). Doesn't mean I still don't feel a bit stupid.

So, yeah. I think I might need something simple to work on for a while. Although, I still might manage to screw it up.
Posted by Liz A. at 8:00 AM