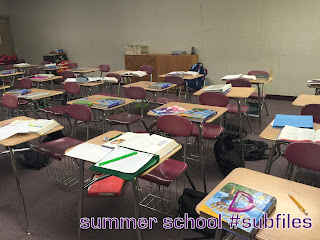 The prior week, I had covered a health class for summer school. Originally I had been contacted to cover the Monday. Then Tuesday through Friday was added. And then the last four days of summer school, the following week from Monday through Thursday, was added as well.

Needless to say, this was not a planned thing, and I wish Mr. C all the best.

They were covering the full semester health class in about five weeks, four hours per day. Which meant that they flew through chapters. And chapter tests.

But going through the chapters this quickly meant that the students didn't have study time to prepare for tests. To make up for this, the teacher allowed open book tests, but just for the first few minutes of the test.

Which, of course, the students didn't think was long enough.

This day they were taking three chapter tests together. Multiple choice and true/false. They'd get fifteen minutes of open book time.

They complained that he gave them ten minutes per test of open book time before. So, they should get longer, they protested.

One girl said that they should take each test individually.

I could see what she said, but I couldn't do this due to the logistics of passing out and collecting tests. Did they take one test, wait for everyone to finish, and then pass out the next test? Or, was I supposed to give the next test when someone finished the first? Which then would mean that each student was on a different five minutes of open book time.

How was I supposed to coordinate all of this?

The girl complained of my use of the term "logistics".

"Do you mean 'logically'?" she asked.

Um, no, "logistics" is the term I meant.

But clearly I was misspeaking because "logistics" isn't a word, and it makes no sense anyway. Couldn't I just give them more open book time? Or pass out each test separately?

This is why I've stopped trying to explain things to teenagers. Sometimes it's like arguing with a brick wall. Although, a brick wall has more give.

I passed out all the tests at the same time, but I did give them five minute warnings. I could, at least, do that for them.
Posted by Liz A. at 8:00 AM