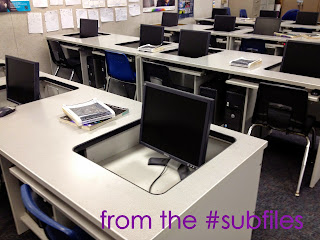 It was the Monday of the final week of school. I was covering a computer class. It was a fairly easy day even though most of them were done with the class. As in, there was nothing left for them to do as they'd turned everything in. They had the computers to keep them entertained, after all.

Fourth period filed in. One boy recognized me from the previous time I'd covered one of his classes.

"I forgive you for art class," he told me.

Apparently, he had gotten transferred out (to the theater class he wanted) before the class had to write the apology letters. Letters he, apparently, thinks were wrong...?

I don't remember what I said in response. Something snarky, I hope. Because, seriously. I wasn't the one goofing off, dude.

And if you haven't seen my Monday post, please make sure to check it out. I'd appreciate any help you can give.
Posted by Liz A. at 8:00 AM