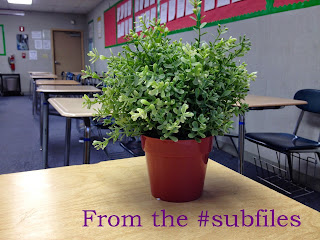 The things I learn while subbing...

So, there's this sponge thing that if you (and by "you" I mean an African-American teenage boy) apply it to your hair, it creates a soft spiky hairstyle. (I wanted to post pictures, but I don't take pictures in class, and I couldn't find one that I could reuse, so you'll just have to follow this link to see what I'm talking about. Or Google: curl sponge.)

I learned about this last Monday when two boys spent the entire first period using this sponge rather than doing their assignment. Well, they did a little of their assignment. (It was a special ed. study hall, so there wasn't that much to do.)

I had them in class again fifth period, only this time it was an algebra class. They didn't get a whole lot done then, either. (They spent the entire period copying the definitions--something that should have taken five minutes tops.) So, I left their names in my note.

Last Wednesday I had a roving assignment. Sixth period was special ed. biology. And I recognized more than half the class from Monday. Including one of those boys.

He didn't look happy to see me.

In fact, he looked kinda pissed off. Muttered something along the lines of, "Not her".

Me thinks there were some consequences for his lack of work on Monday...

His behavior Wednesday? Well, the friend wasn't in class. They were watching a movie (stuff about the ocean). And I had an instructional assistant who knew him. So, the fact that he sat quietly and kept to himself could be attributed to any of those factors.

But this is why I leave names in my notes. Not so much for punishment (for if they go over-the-top I just send them out). It's more to let them know that their actions do have consequences. And that makes future days with me easier.

A couple of you have wondered that we are still in school. Yes, we are. Another week and a half to go. Those of you who are already out of school--you get out EARLY. Of course, you also start back early, so it evens out in the end.
Posted by Liz A. at 8:00 AM