Not Monitoring This Time 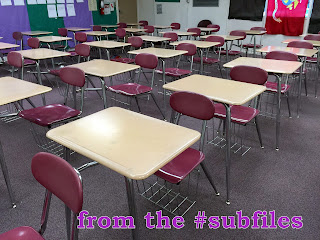 Tuesday was the first day of finals. And I actually got to proctor a final, albeit with the "assistance" (read: she did all the work) of a co-teacher. 11th grade English. Their final was on The Catcher in the Rye.

Arriving late was... Tito! Remember Tito? I did. Vividly. And considering how little of his test he got done that time, I wondered how he'd do on his final.

Well, at least Ms. B was the special ed. teacher that knew him pretty well.

I stood over him a bit. Ms. B had him sit in a front desk. And, unsurprisingly, he was the last one done. However, he did manage to finish and before the end of the two-hour block. (I did not see his cell phone.)

Ms. B graded the finals. The class didn't do so hot on them. I think the student with the best score in the class had missed 19 out of 53. (They were to have read the book in groups in class. Seems like they may have done more visiting than reading in the time they were given.) Tito did fairly well comparatively.

At one point, I had a chance to tell Ms. B the story. That story I linked to earlier. About how Tito asked if he had gotten a text while his cell phone was in my custody.

Ms. B thought that was hilarious.

And if you haven't seen my Monday post, please make sure to check it out. I'd appreciate any help you can give.
Posted by Liz A. at 8:00 AM