Not Even Plausible Lies 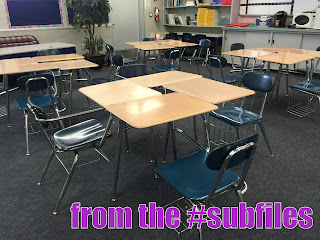 "But you're the teacher, not her. You don't need her permission to let me go..."

Johnny protested loudly, talking over me after I had said no and he asked me why. My explanation of, "Mrs. V already said no," was unacceptable. But I know this game. I give a reason. They argue the point. (It's why, "Because I said so," is my go-to reason for most things.)

It was the beginning of the period. The bell had barely rung. Johnny leaned out the door. Asked to go to the restroom. Mrs. V asked him why had hadn't gone during snack--10 minutes of free time that had preceded the period. Johnny said that he was stuck in testing.

(The Smarter Balanced testing. They've been calling students out of class to make up portions that they missed.)

Mrs. V dug deeper into that. She asked to see his pass. Turned out he returned to 2nd period towards the end. Johnny said that he stayed in at snack to get the assignment. Another student piped up with the information that they had been watching a movie.

So, did Johnny stay in at snack? Well, that's easy enough to verify. Who's his teacher? He didn't know. (Um, it's the end of the school year, and he doesn't know his teacher's name?) Okay then, what class? He had no idea. (Said he sleeps through class.)

Sleeps through class. Doesn't know the teacher's name. Stays after class to get assignment that he missed for being out of class. Which of these things is not like the others?

Clearly, he was angling to get out of class. Before it even began.

(That was a day. I had two other students that I can only describe as jerks in later periods. Sigh.)
Posted by Liz A. at 8:00 AM