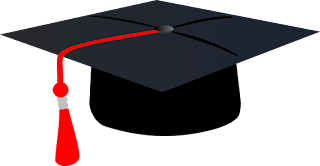 It starts with a stage filled with teens in caps and gowns. A graduation ceremony. The new graduates look over the audience filled with proud parents. They're excited. They've finally finished school, and they're looking forward to the next phase of their lives.

The new graduates exit at the side of the stage. They hug each other. Many are in tears. They meet up with parents, take pictures, and gradually leave the area.

The stage is empty, but not for long.

Off to the other side of the stage is another group of students a year younger than those who just exited. They climb the stairs and claim the stage for themselves.

The new senior class surveys its domain. Some look in corners. Others go to the edge of the stage and peer out at the audience. Many are cheering, fist pumping, and bouncing up and down. Two boys run at each other and bump chests. They have arrived.

While the new senior class celebrates, the area just off the stage that was just vacated starts to fill. This group looks around in awe and wonder. A few look up the steps, itching to join the new seniors. Several look out over the line that stretches out behind them. It's a long line and it seems to disappear into the horizon.

As each group moves up to the next position, they look over their new surroundings. The new freshman class, however, is so busy celebrating and laughing at the group just below them that they don't notice how trashed their new position is. Then again, their old spot in the line wasn't much better.

The newest middle schoolers carefully take up their new position. They are all wide-eyed wonder. The more adventurous pull their peers along. They take their time looking around, acclimating to their new position in line. There's a demarcation behind them, and they thought they'd never get beyond that border. Now that they are, they're not sure what they're going to do next.

Each elementary grade moves up one. As the former kindergartners take their first grade spot (and make themselves right at home), an empty spot is left at the end of the line. But like all the other spots in line, this one doesn't remain empty for long.

Off in the distance, family groups start to arrive. The parents push their little ones into their spot in line. Some of these children run to take over their spot. Others cling. The families stand there, watching their little ones for some time, not sure what to do next.

One mother shakes her head as she watches her little one acclimate to the line. "They grow up so fast," she says.

Nearby, various people are on their way out of the area. One woman hears the kindergartner's mother, so she turns to her and says, "You have no idea." The woman looks off into the distance where her graduate is off with friends.

"You have no idea," the woman repeats.

Happy end of the school year (although many of you did this weeks ago).
Posted by Liz A. at 8:00 AM