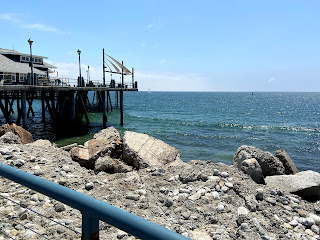 I don't plan these things. They take me by surprise.
Last Monday, my roommate had an ophthalmologist appointment. Luisa (my other roommate) had the idea for us all to get out of the house. We'd wait while she had her appointment, and then we'd head to the nearby pier.
(There are lots of local piers. Roommate's appointment was about 15 miles away, so it took us out of our immediate vicinity.)
Roommate's appointment took two hours. ??? Apparently, there had been two emergencies while she was there, so she had to wait much longer than expected.
Luisa and I waited in the car. I brought reading material. I also left the window down.
I really should have realized sooner that my arm, the one that was in the sun, was burning. But it's been a while since I got burned, and I didn't realize I'd be out in the sun that long.
I won't subject you to a picture of the sunburn. I have a gel that helps. It has since faded. I swear I won't let it happen again, but I know another time I will be taken by surprise. Sigh.
But, in case you'd like a view of the ocean... 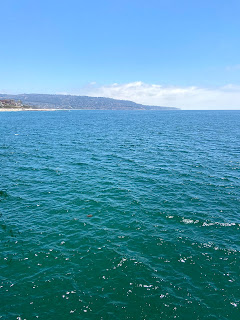