This is my 2900th post.
Remember my "knitting" picture from last week? 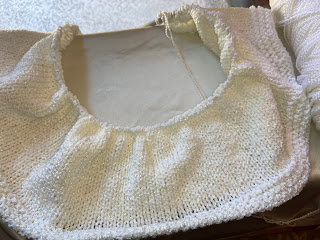 Since then, I have maybe added an inch to this. (And no, I'm not talking about what it is yet.) 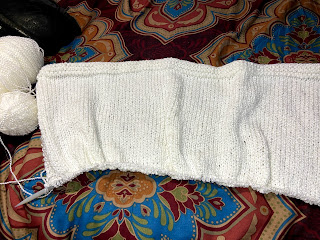 For the week, that was all of the knitting I did.
It's not that I didn't have time to knit. It was that my yarn got into the worst tangle...
Honestly, I should have prepped better. When I pulled the yarn out of my stash, it was a mess. I had three "skeins". One was a full skein, still with it's ball band. One was just a pile of yarn. And one was half skein, half pile.
I took the pile and wound it into a ball. The full skein was perfectly sorted.
The half skein, half pile was where I made my fatal mistake.
I thought about pulling it all out and making a ball. But I wanted to get started knitting. So, I took the pile part and wound it around the skein, (No, I didn't take a picture of this. If I had known...) I figured it was sorted well enough.
I started knitting. Things went well for what is in the first picture. But about two days after that picture was taken, the half skein got to the portion where I had wound the yarn, and I hit a tangle.
No problem. I cut the yarn, untangled, and kept going.
But then the tangle got worse.
So, instead of continuing on, I figured I'd take a half hour and rewind that yarn into a ball.
This took me three days.
(Well, not full days. Three days of knitting time. So, all told, probably ten hours.)
I felt sure I'd finish the first night, even once I got into hour three. But at about 1 AM, I called it. I had to be up for work (from home, but still). And I thought I'd finish the next night, no problem.
The second night, I got stuck with this knot. I don't know how it got knotted so bad considering that at no point did I knot the thing. I tugged and shifted and pulled for a good hour, but again, at 1 AM I called it.
That was when I considered cutting the yarn again. But I didn't think I was that far gone.
The third night I cut the yarn. After that, I was able to unknot the worst of the tangle with ease.
Why didn't I cut earlier? I was trying to avoid more ends to wind in at the end. And I didn't think of it. It's funny what obvious solutions don't occur when one is in the thick of doing something.
So, nothing exciting happened in my knitting last week. I need to make more masks or something, or I'm not going to have anything to write on Mondays for a while.
Posted by Liz A. at 8:00 AM

Email ThisBlogThis!Share to TwitterShare to FacebookShare to Pinterest
Labels: knitting