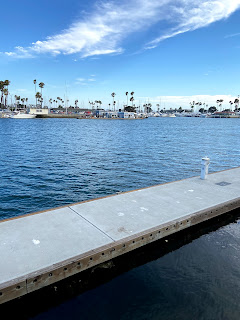 Today is my birthday...
This happened last week, the day after this picture was taken. Luisa wanted to walk by the water. And even though I was feeling a bit under the weather, I went along. Alas, Wednesday morning I wasn't feeling great.
Let me be clear here. I had a cold. Stuffy/runny nose. Not much in the way of a sore throat. A minor cough, but that cough was more of a clearing out the stuffed up nose than anything else. I knew it was a cold. It felt like a cold. And I'm all better now.
But Tuesday night the landlady got notified that a friend had tested positive for Covid. A friend that she had just been with.
She has a group that meets up once a month. They usually go out to dinner. Since the shutdowns, they hadn't been meeting, but as things were opening back up, they figured it was safe. They met at one of the ladies houses. Masks, social distancing, etc.
The median age of the group would likely be in the 70s range. The lady that tested positive was 86. She had gone to the doctor for an unrelated issue, and the doctor had ordered the test.
Uh oh. Had we been exposed?
Landlady frantically tried to find a place where she could get a test with rapid results. (I don't know why she didn't want to make an appointment with one of the city run testing sites. They've been expanding testing, so we totally would have gotten in.) She found an urgent health care facility that was performing tests.
We scooted on down there. No line. But, the only person who was going to be let in was me. And that was no guarantee. Because I had a cold, I had enough symptoms to go in, but I was told that I'd have to see a doctor who may or may not order the test.
I wasn't running a fever. I knew I had a cold. I'm pretty certain I would have been turned away test-free.
So, we left.
Once the initial panic subsided, we gave it some thought. Landlady had seen her friend 13 days prior. Wouldn't we have been showing symptoms by now?
Considering how long this has been going on, it's a wonder we've not had a scare like this before. Fingers crossed that we don't again.
Posted by Liz A. at 8:00 AM