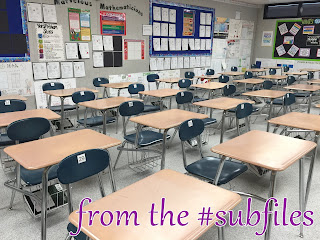 My big excitement for last week was rearranging my yarn. Seriously. I removed it from a box containment system and put the various skeins in bags... Yeah, I won't bore you with details. That just means that today is a #ThrowbackThursday day.
The new Blogger makes it harder to go back to older posts. Sigh. So, this isn't as way-back as I could go, but it'll do. It's from May 23, 2014, and it was an interesting day.
It was a Friday near the end of the school year, and I ended up subbing for the cheerleading coach. She taught science the rest of the day. It was only for 6th period that I had the cheerleaders. All sitting in one classroom. With nothing to do.
(Well, technically, they had a "study hall". But rarely do the students in these types of classes, i.e. student government, the yearbook, the golf team, do anything on days like this.)
I managed to get roll taken, and then I sat back. One girl asked the others if they'd like to play a game.
Days like these I get to be a fly on the wall. They know I'm there, but quickly they forget all about me. And I get to see them in their natural habitat. What sort of game were they going to play?
The girl announced that they were going to play "Going on a Cruise Ship". Each girl got to take two items with her. And if she got the items wrong, she was booted off the ship. Now, the rules of the game were kind of unclear, because one girl said she'd bring her swimsuit but was booted off while another said she'd bring an alligator but could stay.
But that was the point. From playing the game and listening in, the girls had to catch on. (A girl near me explained the situation.) It was a puzzle. And it ticked a couple of the girls off.
(I've done a couple cursory Google searches, but I have been unable to find the games. So, sorry, I can't provide rules.)
Apparently, they played this game at cheer camp last summer. And there were other games, too. After they all figured out the cruise ship rules (or some just gave up).
The next game had to do with a bouncing ball. Not an actual bouncing ball, but a fictional ball that one girl threw to another, but that girl missed it, and it went... That's what they had to guess. Who had the ball? This one they figured out pretty quickly.
Then the first girl took three dry erase markers from the board. She arranged them on the floor in the middle of the group, saying that she was "drawing a picture" of one of the girls. (No vandalism took place.) Then the girls had to guess who she drew.
Now, for me it was hard to follow along as I didn't know the girls' names. I learned a few as they did all of this, but from my vantage point and where the dry erase markers were, it was hard for me to see the full picture. (I could have gotten up. They wouldn't have objected if I sat among them. But I didn't.)
The last game had them looking at the moon (figuratively) and having something with them. Again, no rules. They had to figure it out themselves.
It drove some of them crazy. One girl would think she had it, attempt to do something using the rules as she understood them, and find out that she had it wrong.
I thought it was a great mental exercise. Very educational. Of course, I didn't mention that. They were having too much fun. (Or maybe "fun". You know, the kind that makes you crazy because you want to know how it works. Kind of like magic tricks.)
Posted by Liz A. at 8:00 AM