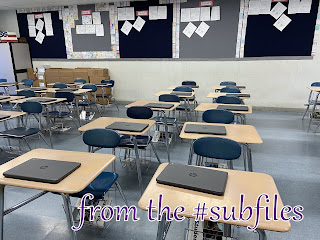 It was two against one. The two had been out of their seats, loudly complaining, and just generally not letting me get class started.

The one, Virgil, had been in his seat, quiet, and not bothering anybody.

Mateo wouldn't sit still. He needed to blow his nose several times. Then he needed hand sanitizer. Journalism students brought school newspapers, and Mateo said it was his job to pass them out. (School papers are left in a pile for students to pick up if they want one.)

I caught Myles angling his Chromebook (computer) Virgil's way. When I went to see what was on his screen, it had suddenly become the study guide that he was supposed to be working on. ("No, there was nothing else on my screen.")

Um, who's the bully?

In my defense, I was busy with the rest of the class as well as trying to contain Mateo and Myles. But I was not defending Virgil as I should. When Virgil asked to go to the office, I knew he wanted to inform the assistant principal. I wrote him the pass.

And when the assistant principal called, I let him know that Virgil's story was likely accurate.

It was after class that a girl approached me to let me know what I hadn't seen. Mateo had been pointing at Virgil and calling his name. Both boys had been taunting Virgil. Virgil swatted the finger (as I totally would have done in the same situation). That's what the boys termed "hitting". (Accurate, but completely mischaracterizing the interaction.)

So, yeah, Mateo and Myles were the bullies. And of course they accused their target of the acts they were guilty of.