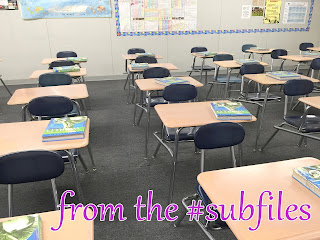 Tenth grade world history. As with every other class I covered the week before finals, they were working on the study guide for their final.

It was passing period before fifth period. Ellie darted into the room, looking anxious.

As Ellie's friends arrived, I gleaned the reason for her distress. (Students rarely tell the sub what's going on. I have to figure it out for myself.) Someone had stolen Ellie's shoes from PE, and she was at that point walking around in only her socks.

(Why she wasn't wearing her PE shoes was never discussed.)

She was understandably distracted. (I guess they were Vans in a navy blue. I think that's what I overheard.)

When she asked to go back to the locker room to look for her shoes again, of course I let her. When her friend "needed to use the restroom" as the same time, I allowed it. When they returned together, I was not surprised. I was also not surprised Ellie did not find her shoes. (Still, why not wear her PE shoes...?)

While Ellie was gone, the attendance office called. That's where parents can drop things off for their students. Ellie darted back out when I told her.

Alas, Ellie was not happy with the shoes that had been left for her. She got on her phone and told whoever she was calling that she had half an hour until lunch, and "people can't see me like this..."

She was wearing a Spongebob Squarepants T-shirt and gray legging shorts. I'm not sure how her shoes improved the outfit.

Shortly thereafter, Ellie asked to go back to the attendance office. Again, I allowed it. (I'm not an ogre.)

Ellie returned to class wearing Nike slides. These shoes replaced the white slides that someone else had given her to wear. I didn't see all that much difference between the two (although, the Nike slides were black). And she looked way more relaxed.

Only then did she ask what the day's assignment was. (It was posted on the board. I had announced it.) She had less than ten minutes of class to do anything.

I get why she was upset, but I don't think I would have taken up the whole class period on the shoes. But then again, I am an adult.

Ellie was so displeased with the white slides that I found them left by her desk after she left... 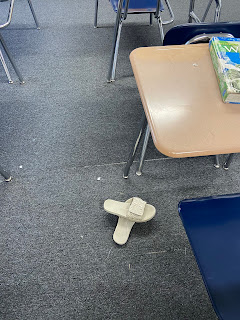