Passing a Note in Class 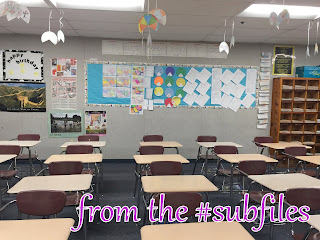 I had been warned about sixth period...

Seventh grade world history. They were studying Japan. They had a quick PowerPoint followed by taking notes out of their textbooks.

The other classes had worked quietly. Not them. But, they were working, so it could have been so much worse.

Before all this, as they were arriving, I noticed that someone from the previous class had left behind a pencil pouch. Before I could retrieve it, another student picked it up. (Later I found out they'd put it in the class' lost & found. Middle school students are constantly leaving things behind.)

Then a girl started "sharing" sticky notes. Did these sticky notes come out of that pencil pouch? (No, they didn't.) Why do the kiddos need sticky notes? This is the sort of thing that can go sideways, so I kept an eye on that while I got class started.

And then I heard rumblings about someone passing a note...

Students passing notes in class hasn't been an issue for years. Nowadays, they just text.

I informed the class of my passing notes response. A passed note gets photographed and posted to Instagram. (Well, it wasn't Instagram before--I just posted them here on the blog, like here and here--but with Instagram, it's a better threat.)

So, I went through the PowerPoint, and I got them started on their notes. I had taken roll, and I was settling in, when I noticed the kiddos distracted by something.

They readily gave up the note. Here it is... 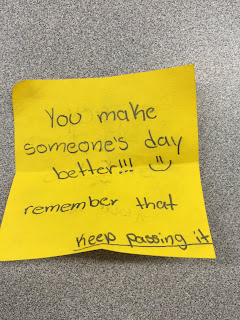 Sigh. I can't really object to the note. (Usually they're juicier.) But it did cause a classroom distraction...

It makes sense that sixth period would pass something like this.
Posted by Liz A. at 8:00 AM