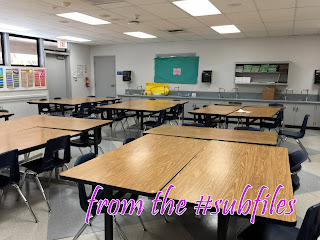 I am now firmly back in the day-to-day subbing routine. Oh, how I missed it!

On Monday, I covered one period of WEB (We All Belong), which is a class of eighth graders who host activities for the newly arrived seventh graders. (The high school has a similar program called Link Crew where the juniors and seniors support the incoming freshmen.)

It was a small class of ten students. They weren't a difficult group, but they were a bit strange.

Hailey was this little blonde bundle of energy. She was quite a bit like Dug from Up, only her "squirrel!" was Ms. P.

Ms. P is a science teacher whose classroom is about three doors down from Ms. W. I've seen her, probably said hello in passing once or twice. I've covered her class a couple times.

Hailey was obsessed. And, apparently, the rest of the class (Aisha in particular) enjoyed the entertainment. To a point.

Upon entering class, someone claimed to have just seen Ms. P.

Then someone else explained to me that Ms. P had a restraining order against Hailey. This was a joke, because Hailey would be all over the teacher when she'd stop in.

(For the rest of the day, Ms. W. teaches science, so Ms. P and Ms. W confer frequently.)

Somehow, we diverted Hailey to other concerns (although little miss bundle of energy couldn't sit still).

But the topic of Hailey's obsession came up again, and Aisha gave her two minutes to gush.

"You weren't invited," someone else in the room said.

Then someone else claimed to be going, and Hailey needed pictures!

Email ThisBlogThis!Share to TwitterShare to FacebookShare to Pinterest
Labels: #subfiles, 8RE, about a student, middle school, substitute teaching