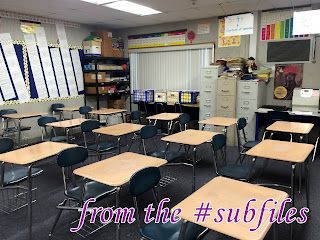 Eighth grade math. The assignment: a shut up sheet. (Same teacher as the link. Although, I don't think the kiddos have learned the term yet.)

The lesson plan warned that the students should not be out of their seats. They were not to go anywhere near the front of the room. And for the most part the classes remained seated and on task.

But, they needed a lot of help. The kiddos were having issues with rounding, of all things.

Fourth period. There was this one kid. His desk "magically" slid forward. And his stuff wasn't where he left it, supposedly.

At one of the pauses, when none of the kiddos needed me at the moment, I happened to glance at the teacher's podium, and I found one of my supplies was missing. My eraser.

Before assuming one of the kiddos was a klepto (but these are eighth graders, so I was pretty sure it was theft), I took a look around the podium (that they weren't supposed to get near) to make sure it hadn't fallen somehow.

Luckily, it was mid way through the period. It wasn't too late. And as this sort of thing has happened before, I know how to get my stuff back.

I asked for it.

Now, no one admitted that they took it. And I didn't accuse anyone. I just announced to the class that I wanted my eraser back, and whoever took it needed to return it. I didn't even resort to threats. (Although, I totally would have called security if it had come to it.)

Another student needed help. Before I got back up front, someone "found" my eraser on the floor next to the podium. Imagine that.

Eraser returned. I was good. I said no more of it.

Well, not to the class. To the teacher... Yeah, that went in the note. I may have also pointed out who I suspected was the culprit. Because the teacher totally needs to know he has a klepto in his class.
Posted by Liz A. at 8:00 AM