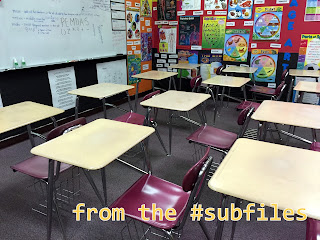 About halfway through first period, the instructional aide (Ms. S) noticed that the four blood types were listed on the board. Identifying them was one of the questions on the quiz. Oops.

Since erasing them would have drawn attention to them, we decided to leave them up. It was an experiment. Would the students notice?

The students who finished early enough had the opportunity to fix wrong answers. (They get docked a point.) Many had found the blood types. They were in the book. What wasn't in the book but was a question was, "What's the universal donor?" And they all missed that one.

Ms. S pointed out that their teacher Mr. M had gone over that with them. But still, they couldn't recall it.

Towards the end of the period, Mr. M came by. (He was out due to a field trip, but the group hadn't left yet. He was checking in.) We pointed out the blood types listed on the board. We also mentioned that the class didn't remember what the universal donor was.

Instead of erasing the blood types, Mr. M made a slight modification to the board... 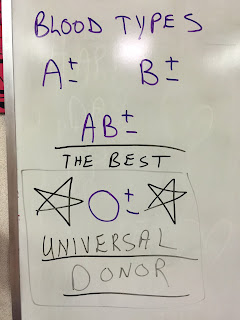 So, the rest of the day saw this right away and got the answer correct, right?

We basically had to hint rather strongly to get them to notice. And still...

There's a reason they're in special ed. Although, I know plenty of regular ed students who would miss the obvious as well.
Posted by Liz A. at 8:00 AM