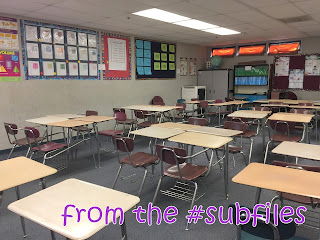 Eighth grade math. I covered the class for two days.

On day one, they were finishing up a lab. They had measured their heights and their armspans the previous day, and they were comparing the two. It was the kind of assignment that they should have easily finished.

But, they were on sub behavior.

It took them the whole period to graph all of their data. (That was roughly 30 points per class, but still, a whole hour?)

As Mr. J, their teacher, had been at a training, he stopped by at the end of the day to see how things went. When he learned that they hadn't finished what they needed to finish, he told me to go ahead and finish it up the next day.

And we did. One class even got some free time. Another got finished with only about five minutes left in class, so no free time. But they finished, so all was good.

The prior day they had been difficult. But on this day...

I was authorized to do the assignment with them. That means, if they were following along, they got a complete assignment without having to do too much thinking. (Oh sure, I called on students to provide answers, but I made sure what they wrote down were the correct answers.)

But sixth period wouldn't let me get a word in edgewise.

I stood up in front of them. I got their attention. Then I turned to go over the first question, and they started talking.

I stopped. Waited. Asked for attention. Then I tried again.

They started talking again. So, around we went...

After about forty minutes of not being able to get to the answer to the first question because they wouldn't let me do it, I gave up. There are only so many ways one can ask for a class to stop talking and pay attention so we can do the work.

(The other classes that day managed to let me teach. So, it wasn't beyond the capability of an eighth grader.)

I had them pull out a sheet of paper and write a letter to their teacher explaining why they got no work done that day. I rather doubt they took any responsibility for their actions, but I was done at that point.

This is why most teachers give their classes worksheets on sub days. Although, not all classes behave this way. It's just so frustrating when they do.
Posted by Liz A. at 8:00 AM