It started with the three sunburns. Although, maybe that's just one manifestation of it. I don't know. I don't know much of anything at the moment.

See, I've discovered that this summer I've turned into a complete idiot.

I already mentioned how I forgot to bring a chair to the farmer's market I did a couple weeks back. I did not mention how I managed to scrape the side of my car so bad that I could not open the passenger side door. How did I scrape my car? I misjudged the turn in the garage. Of course, you'd think I could manage to park my car in the garage I always park my car in, wouldn't you?

A couple days later I did something I've never done before. I locked my keys in my car. And didn't realize it until hours later.

It's gotten so bad I've started labeling my mishaps #IdiotSummer on Twitter.

The reason I'm mentioning any of this has to do with a discovery I made the other night. You've all seen the pillow I knit to prop up my ereader... 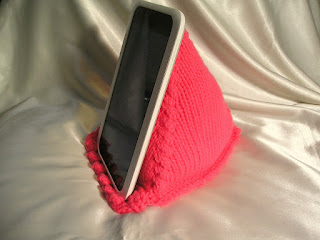 This pillow, while useful for things like keeping my knitting patterns propped up, has never really worked for its intended purpose. I wanted something to prop up my ereader so I wouldn't have to hold it while reading in bed.

The problem: I discovered that I like my ereader to be at an angle. 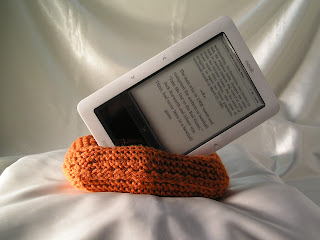 (The above pillow worked great with my old Nook, but the newer version goes all the way to the bottom of the device, so this pillow ends up covering up the last couple lines, making it annoying to use.)

But just a couple nights ago, I tried something different... 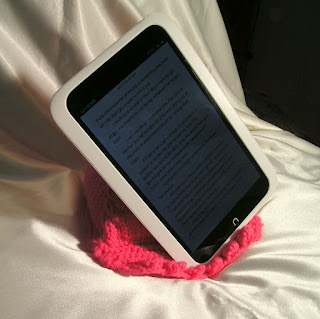 So, the thing I knit so long ago... can actually be used for its intended purpose...

I won't make this any worse by trying to figure out how to embed a gif here.

So...done anything interesting this summer?
Posted by Liz A. at 8:00 AM