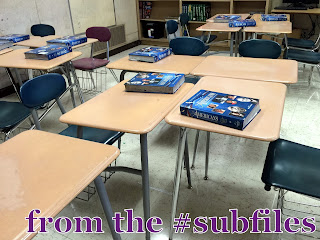 I covered Mr. H's class again this past week. And there was not a blog-worthy thing that happened. Unless you want to hear about kiddos talking rather than working. Yawn. So, I'm going #ThrowbackThursday to something that was blog-worthy. Mostly because as I was in the room, I remembered this incident and had to reshare. This was reposted on September 27, 2009.

It was near the end of the day. I had two students just sniping at each other as much as they could (though, to be fair, they spent most of the period quietly working). The boy was calling the girl stupid while the girl was berating everything the boy said.

It was a government class, and they were studying Congress. I tried to draw the conversation back to the topic at hand by asking where the largest congressional district was (it was a question on "Jeopardy" a little while ago). The answer: Alaska.

Now, I hate to have to side with the boy here. I was trying not to take sides. The girl wasn't really that stupid (she was on task, after all). But...

"Count the stars on the flag," I said.

But then the bell rang, and she was out of there.

Sometimes, the students scare me a little.