Last Wednesday, I was knitting while watching "Pretty Little Liars" which I had recorded on my DVR.  Well, I wasn't so much knitting as stitching together the finished squares of the Chameleon Scarf that I started on July 1st.  Of 2008.

I'm not really that slow of a knitter.  I started the scarf, worked on it for about a month, and then I got distracted by other projects.  I only picked the thing up again a couple weeks ago.

(Oh, and about the choice of shows?  I'm ashamed.  I only started watching it because it was "from the producers of 'The Vampire Diaries'," another show I'm ashamed to watch.  I'm so done with vampires.  But "The Vampire Diaries" is really, really good.  It's twisty and surprising.  I liked that I didn't see things coming.  So, I was hopeful that "Pretty Little Liars" would be similar.  We'll see.)

So, I was sitting when I started to feel something.  Was I being paranoid, or was it an earthquake?

I dropped the scarf into my lap.  I hit pause on my DVR.  I sat still.  The room was swaying.  It was an earthquake.

It seemed to last for a while.  But if I hadn't been sitting, I probably wouldn't have felt it.  The earth stopped moving.  I hit play on the DVR.  I picked up my scarf.

I finished the scarf shortly thereafter.  Here's what it looks like: 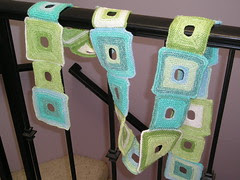 And here's another shot: 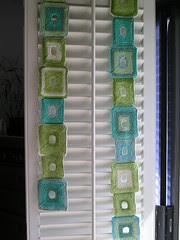 Okay, so enough with the earthquakes already.  It's beginning to feel like high school all over again.
Posted by Liz A. at 1:08 PM