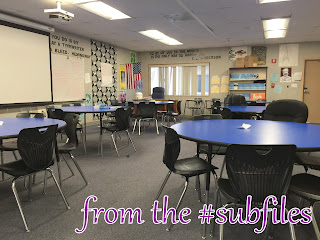 Since Darla brought it up...
Pretty much nothing happened last week in my little corner of the world. (The world at large was figuratively on fire, but it's been that way for a while now. Besides, you all already know this.) Which means it's a #ThrowbackThursday.
I'm reposting the post from May 9, 2019. Darla's comment last week: "...I'd probably end up in the wrong school based on some substitute teacher's regular rounds in our state," reminded me of the day that *ahem* I ended up at the wrong school...
Considering how long I've been subbing, I'm surprised I haven't had this issue before.
I had called ahead a couple weeks prior for this assignment. "Mrs. Jones" at "school A". I've covered Cindy Jones' class several times, so I knew what I was in for. (Cindy Jones' room is pictured above.)

It was a pretty good morning, and I managed to get there fairly early. I went to check in.

A couple things were working in my favor. I was running early. And "school B" starts a half hour later than "school A".

I got to "school B" easily and checked in. It was a bit of mentally changing gears. Cindy Jones teaches English. Rebecca Jones teaches intro to health careers.

I blame the sub caller. She's new. As in, she's had the job for about a month. Mistakes happen.

(I did actually get a chance to chide her for this. She called me for a gig for the next day. I mean, I wasn't going to call her just to give her a hard time about the mixing up of the schools.)
Posted by Liz A. at 8:00 AM