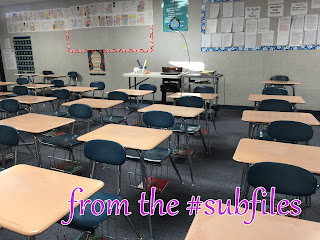 Take one staple. Unbend the corners so it's as straight as you can make it. Fold a sticky note into a triangle thingie. (Here's a helpful tutorial.) Place the staple at the sticky tip of the triangle... 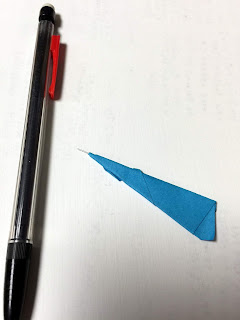 It's an ingenious device. Alas, its only purpose is goofing off in class...

Eighth grade English. They were doing a one-pager book project. Basically, it's a poster about the book they read.

Fourth period. They came in, climbed up on the desks, and retrieved the ceiling darts (a quick internet search yielded that term) that were stuck in the ceiling.

I only noticed these at the end of third period when one boy pointed them out to another. (Period three worked quietly all period, so they had been in the ceiling since before.)

I was glad to have the darts removed, but I kind of knew what would come next.

The boy tossed the dart at the ceiling...  and it bounced off.

To get them to stick takes a bit of skill. Throw them too hard and they bounce off. Too soft, and there's not enough force for them to attach. There should be a bit of spin on it, but if it hits the ceiling at the wrong angle, it won't stick.

It's the sort of activity that only goes unnoticed when the class is already difficult. Because the sound of the darts hitting the ceiling is kind of distinctive. (Although, if they go in, it might not be too loud.)

I know to shut this sort of thing down quick.

After the first one didn't stick, I retrieved the dark and tossed it in the trash.

As luck would have it (although, probably not luck), that boy had an appointment to do his work elsewhere that day. The teacher had several students going out, probably because they'd given previous subs issues. With him gone, I'd hoped the game was over.

Unfortunately, I had to throw out three more darts (and one of those twice) before the game was truly over.

Then they got to work? Nope. They still avoided the assignment, but at least they did it without throwing things at the ceiling.
Posted by Liz A. at 8:00 AM