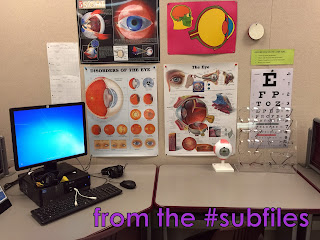 The class was called Introduction to Health Care Careers. The students were grouped into partners, and each group had their own station. Each station explored a different health care career such as optometry, dentistry, nursing, veterinary, and a few others that I can't recall off the top of my head.

They were working on one of their activities. I walked the room, made sure most were on task, and then I took a seat at the teacher's desk. And repeated several times during class.

The two girls right behind me claimed that they had finished this activity already, so they were watching something on YouTube. Not ideal, but these were the kinds of students I trusted, so I didn't give them a hard time, just taking a look at what they were looking at before moving on.

I was in my seat when I heard the crash behind me. Both girls had fallen out of their chairs.

So, they weren't on task, but now it was clear that they weren't peacefully entertaining themselves. Now they had my undivided attention.

(From what I could gather, whatever they had been watching on one of their phones shocked them so badly they backed away quickly and... Of course, they found this very, very funny. So, not sure if it was something funny that made them fall or something scary.)

They did not like this one bit. I was staring. And they were "uncomfortable". Well, yeah. Them falling out of their chairs makes me uncomfortable.

They protested loudly that I was now watching them. One picked up her phone to "film" me. "You don't like that, do you?" No, not really, but I'll put up with it to make sure you don't hurt yourself.

And I needed their names. Because the station they were at did not have students assigned. Naturally, one girl called the other by her name. (If I had asked their names, they would have lied. But if I don't tell them I'm looking for names so I can write them down, someone will let a name slip.)

Girls falling out of their chairs definitely need a mention in the note.
Posted by Liz A. at 8:00 AM