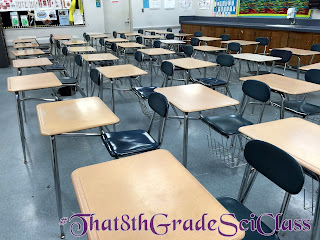 Last week I ended up covering the classes that I started the year off covering. And I ran into the "star" of today's story. And he was just as impossible in the science class as he was in his math class. So, I've learned another student name, and not in a good way.

Something to worry about, right? Not really. See, context is everything. And at that exact moment, I was trying to get them all to stop talking so I could start class. This was the same problem I had with them in the math class last week.

Besides, Blaine didn't appear to be in that much pain. Especially considering how many times he was out of his seat that period. And he wasn't limping.

But at that moment, when apropos of nothing he announced to the whole class his imaginary ailment, I attempted to inform him that perhaps that was not the time for such things.

Which was the main problem with the math class. I attempted to explain what they had to do, but they wouldn't be still long enough for me to get more than two words out. It was frustrating in the extreme.

That's the thing about 8th graders. They don't get the whole waiting-for-the-appropriate-moment thing. They have to tell you exactly what they're thinking and feeling right now. Never mind that other things may be going on in that moment.

They had all of Tuesday to get started on their assignment. And many did. But on Wednesday, Blaine was in search of materials. Because on Tuesday he did nothing. But he had no cast on his foot Wednesday...

Calling him Blaine is just my snark here. (I don't use their real names.) If you've seen Pretty in Pink, you'll get the reference. Because his actual name...
Posted by Liz A. at 8:00 AM

Email ThisBlogThis!Share to TwitterShare to FacebookShare to Pinterest
Labels: #subfiles, it's all about them, middle school, substitute teaching, that 8th grade science class