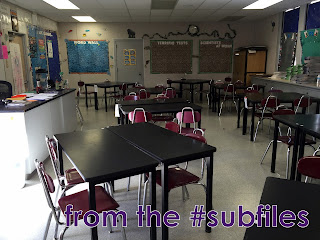 Some days I should really just turn off my phone.

Last Friday. The day before Halloween. Many of the kiddos were in costume.

It was a minimum day (end of the quarter). So, not only were they wound up due to Halloween, but they were also anticipating and early release from school.

Oh, and I must mention that we had a fire drill.

So, the day was bad enough. Add in that I had a 7th grade class. That has had a succession of subs since the beginning of the year. (The teacher's out on maternity leave.)

This is the recipe for chaos.

Yeah, it was bad. By the end of the day I had no voice left. I'll leave it at that.