A while back, I talked about my experimentation with the crochet crocodile stitch. (It was back in May.) I've made some progress since then. 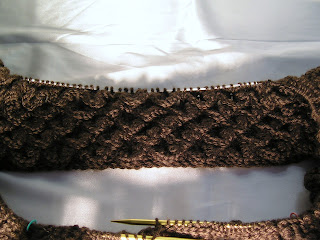 I decided I wanted to make a hood. I saw this pattern, and while I liked the general idea, I didn't like the overall look. So, I've been winging it.

I decided that five rows was all the border that the piece needed. (It had to be an odd number of rows, and three were too few and seven too many.) And now I've moved the whole thing to knitting needles, because I'm going to knit the rest of it.

I need a knitting project. Everything else I'm doing at the moment is crochet.

The next bit is a different sort of experiment. If it comes out nice, I'll post pictures. If it ends up being a mess, you'll never see this thing again. Wish me luck!
Posted by Liz A. at 8:00 AM