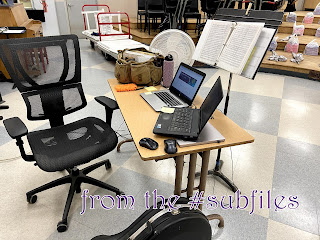 It's not like I haven't worked from home during these interesting times. I had that gig in July that ran through the first couple weeks of school.

I was a bit disappointed when I learned that day-to-day subbing had to happen on campus. It was so nice to roll out of bed and log in for the day without having to get dressed and get in the car and travel. But I understood the district's perspective. They weren't sure how things were going to work, and if we were on campus, they could supervise us better.

And those first few weeks were different. There was the back and forth with making sure we got logged in to the teachers' Google Classrooms. Lesson plans initially were printed out for us. Eventually, the front offices figured out that they could just forward all the info we needed via email. In fact, a couple days one of the secretaries did all of that from her home.

I logged in, only to discover that I'd never enabled the attendance extension on my home computer (because I only learned about it during the co-teaching and didn't need it at home). And then something wouldn't work on that computer, so I hurriedly had to switch computers just as class was starting. And, of course, the second computer didn't have the attendance extension either, so as class was starting, I had to try to get that loaded.

Of course all of this was happening during the band class with 59 students, so I kept getting booted from the meet. (At least the drum major was running things, so they didn't lose instruction time.)

Ah well. At least now I have everything enabled that I need. I hope.