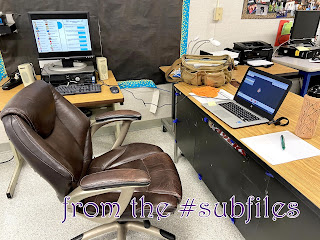 It was one of the "very" special ed classes. Fifth period was math.

The teacher had left no lesson plans for me. In Google Classroom she had posted what she wanted the kiddos to do.

Luckily, the earlier classes were co-taught, so I got the idea of how things were set up. They'd divided the classes into two groups. Group 1 started at the beginning of the period. After about a half hour, they were left to continue the work on their own while group 2 logged in and got a different assignment.

Some from group 2 would log in at the beginning of class, and some from group 1 would remain if they had questions. As the teachers know who's in which group, this isn't a big issue for them.

At the beginning of fifth period, I pulled up group 1's assignment and started going over it. We did the work together.

At the half hour mark, I looked for new students to log in. No one did. So, I continued on with group 1's assignment as the students were clearly having difficulty with it.

At the end of class, I dismissed them. I input the attendance. And I wondered why group 2 didn't show up. So, I checked the names on who was assigned what. . .

And I discovered that I had not had group 1 in class at all. They were all absent. Then I looked at group 2's assignment and understood why they were having so much difficulty. It was much easier than group 1's assignment.

So, I messed up. But, I maintain this was not my fault. Yes, I probably should have checked the names before class, but besides that not occurring to me, I really did not have the time. Not if I wanted to start class on time.

I did not have a list anywhere of who was in group 1 versus group 2. In Google Classroom, if I went into each assignment, I could access who was assigned what. It took about three steps to get to, but only if you know where to look.

Ah well. At least the kiddos were busy for the whole hour. Hopefully they understood their work well enough to complete it on their own. (They could access it in Google Classroom and turn it in for their asynchronous work.)