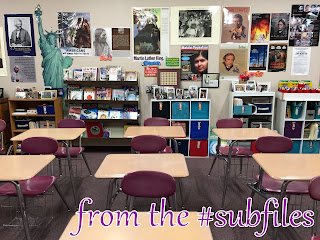 All boys. They came in loud. And I had to scold them to get settled at the bell.

Rico immediately called me over. He had to go to the health office. He hurt his hand.

The third and fourth knuckles on his right hand were purple with a bruise. It looked like he had hit something, hard.

Rico was goofing off. Loud. Not getting settled. So, I didn't really want to let him go. Because, he was clearly looking for an excuse not to work. But, those knuckles looked painful, and I'm not in the habit of denying students passes to the health office when they ask.

He wasn't gone long. He got some ice and returned. And now, it was all about how he couldn't do the assignment due to his hand.

The assignment was a timeline. They had been given a list of events during the Lewis & Clark expedition. They were to transfer those events to a preprinted timeline. Every other class finished by half way through the period.

But Rico "couldn't write". It "hurt too much". And I was reminded of the saying:

Rico was milking this excuse for all it was worth and then some.

And he was joined by two other boys who somehow couldn't get this timeline finished by the end of the period. Sigh. Middle school. Boys.
Posted by Liz A. at 8:00 AM